Update: On March 19, 2018, I sent this letter to the Astros. After I shared this letter on social media, Many friends and others across the web shared this letter. On July 10. 2018 my husband threw out the first pitch at Minute Maid Park. People from near and far joined us at that game. PS It was a strike down the middle! 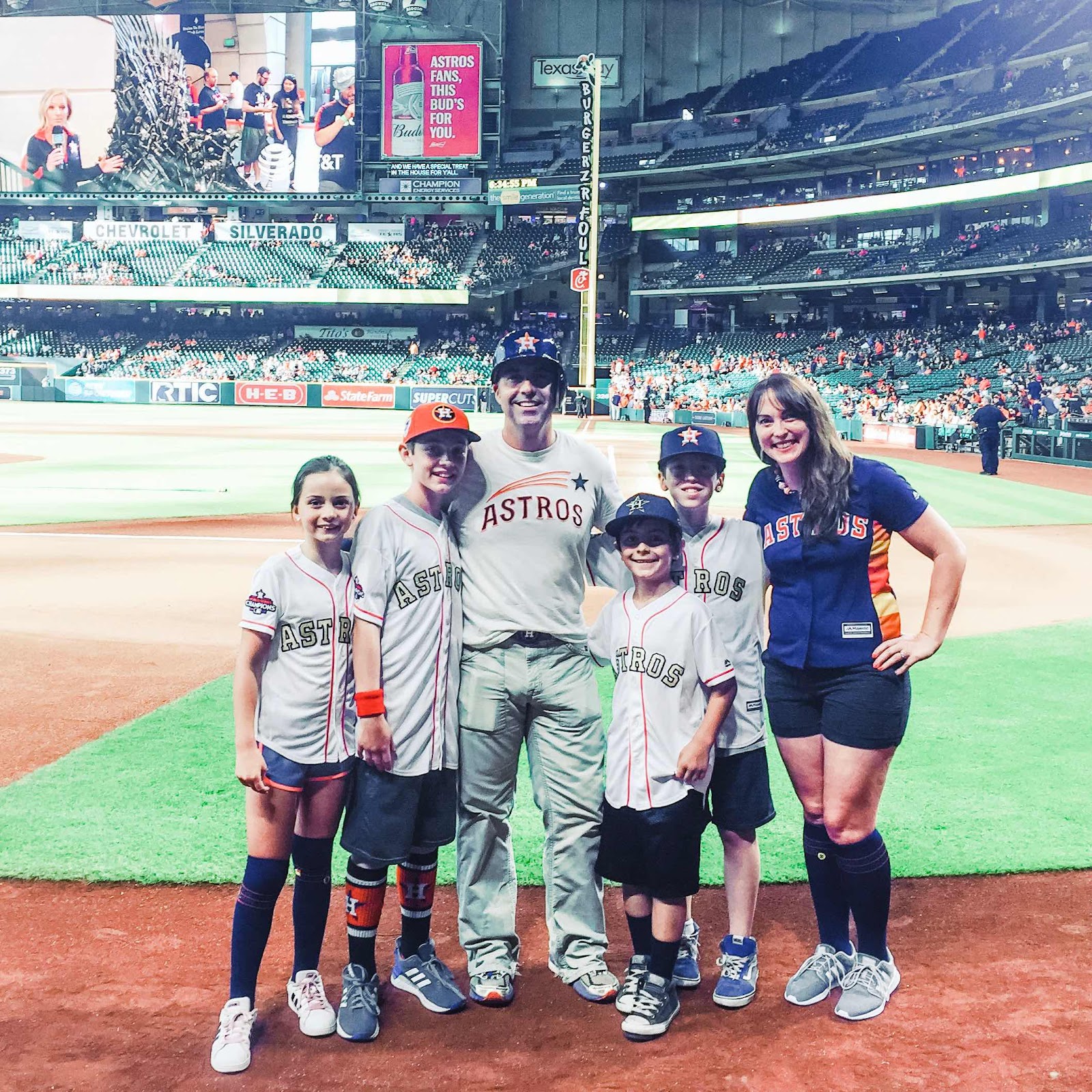 First of all, a huge congratulations from our family to yours on the 2017 World Series Championship! We couldn’t be happier for our favorite team!

I wanted to reach out to tell you a little bit of our story. My husband, Moustapha and I both grew up Astros fans and returned to Houston after getting married in early 2004. Attending Astros games with my brother and his wife, quickly became part of our regular routine. In 2005, we welcomed our first son, Bakri (now, almost thirteen years old) and started off his journey to become a lifelong Astros fan. Even taking him to a World Series game dressed as a bumble bee!

Over the next five years, we would add three more Astros’ fans to our family- Maddux-11, Trinity-9 and Leeland-7. Each of our children loves the Astros, but especially our Bakri, who can hardly wait for the season to begin again each November. Bakri was diagnosed with Autism Spectrum Disorder at five years old, when we had four children under the age of 6. It has been a challenge for our family and especially for Bakri. However, he’s met the challenges head on and has already excelled beyond many of our hopes and dreams. He’s a seventh grader at the Meyerland School for the Performing and Visual Arts concentrating on Vocal Performance and Piano. He’s a member of the Houston BoyChoir Chamber Choir and has been absolutely delighted to sing the National Anthem for two Astros games!

Early during the 2017 season, we found out we were expecting our fifth child! We even had an opportunity to do a photo shoot at Minute Maid Park- on the field and in the dugout, as a surprise for Father’s Day for Moustapha. In July, we learned that our fifth child was a baby girl. We celebrated and our four other children were beside themselves happy. In mid-August, our daughter, Mary-Linda, was stillborn in a Houston hospital. We were and are devastated. It has been the most difficult thing we’ve been through as a family. Within a few weeks, Harvey hit and our friends and family were hit hard. We continued to mourn and look to our Astros for an outlet. They were struggling and we just wanted them home. Going into the playoffs strong, meant the world to us. Moustapha made sure that he and the older boys were at MMP when we clinched the pennant. A dream come true.

We made it to every home playoff game and as the ALCS series was returning to Houston after being in NY, we were nervous. So Dad, aka Moustapha, called a family meeting and we decided that as fans, it was our job to help the Astros get their bats going. So, that is how the clapping batting helmet fan (87 million views on his GIF) was born. All six of us attended game 6 and we were so excited to get that win! Moustapha would wear his batting helmet and gloves every time the Astros batted and take it off when we were fielding. We felt like, as fans, we were part of the Astros success.

For game 7 of the ALCS, we only had four tickets and Bakri had a Houston BoyChoir concert in midtown at game time. We decided to split up- Dad would take Maddux and I would bring Bakri later. During the Houston BoyChoir concert break, I went out to check my phone to see a ton of messages alerting me that Moustapha had been on National television. I thought it was cool, texted him, but didn’t think it would be as major as it was. Memes, and tweets, Instagram posts, and articles popped up during the game, all talking about this amazing, intense, clapping, Astros fan. By the time Bakri and I arrived to the game, the internet had exploded. Over 70 million views on the MLB gif before we left the game. And, the Astros won! Off to the World Series we go! Our family needed this so much and now Moustapha was experiencing another piece of it, with this sudden Astros Fan fame.

It couldn’t have happened to a better guy at a better time. What happened after, was a storybook tale. News story features, articles, and a Law and Order type scene for MLB Network! And, after attending home games of the World Series, the ending was the best of all.

It’s easy for outsiders to empathize with a mother’s loss of a child. Even so, It’s difficult for some to understand, because they feel as though we didn’t know her or we should be happy because we have four other children. Not understanding that losing her and holding her little body in our arms, forever sleeping, is one of the few experiences we got with her. We mourn that she’s not on earth with us. We mourn that she’s not going to grow up with her brothers and sister. We mourn. People understand that more easily for a mother. But, our sweet Moustapha has mourned very deeply. He lost his dear baby girl and this has been a very sad time for him. This experience with the Astros, gave joy back to our family, when we needed it most.

I respectfully request that the Astros organization honor this special Astros fan during the 2018 season. Specifically, by calling on him to be recognized as an amazing Astros fan by having the honor of throwing out the first pitch at a regular season home game. Our son, Bakri, will be singing the National Anthem again with the Houston BoyChoir when the Astros take on the New York Yankees on April 30th. Wouldn’t that be a perfect game? But any will do and your consideration is deeply appreciated.

So, again, on behalf of the El-Hakam family, thank you Houston Astros! You are our favorite team and your win came at a perfect and much needed time for our family. We love you.

2 thoughts on “Letter I sent to the Houston Astros today…let’s get our favorite Astros’ fan out on the field to throw out the first pitch this season!”